Sure. They’re a little scary. But platforms are worth taking a leap. More than a thousand years after the Roman legions ruled Britain by roadway, their radiating network of influence over western civilization inspired Geoffrey Chaucer’s description that “All roads lead to Rome”.

Platforms usually introduce proprietary technologies, characterized by interdependent products and services provided through a network of business partners and competitors.
Platform owners can multiply growth by ceding control over platform access. Accepting a smaller portion of a larger solution yields greater economic value.
As the robber barons of the US railroad era learned the hard way, platform owners who exert overt control or market influence invite regulatory intervention.

Funded by federal land grants, the Transcontinental Railroad system promoted explosive growth in the U.S. economy in the late 1800s.

Industrial platforms, such as the standardized chassis introduced in the automotive industry, reduce cost by defining the standard to share across multiple products.

The chassis from the Volkswagen Beetle provided the “platform” for the Karmann Ghia.

Boeing’s 777 Dreamliner had a rough take-off, but would never have seen the runway without integrating components from a dozen countries and countless business partners.

The Dreamliner could only succeed if accepted globally. By incorporating components from target markets, Boeing equipped participating governments to defend their entry in local markets.

Samsung’s Smart TV hopes to make the medium the message

Samsung’s Smart Hub platform is only the latest stride in the march of progress in consumer electronics, bundling a full suite of content into the TV interface. Platforms integrate far-flung elements from diverse partners, even competitors.

“We never saw ourselves in a platform war with Microsoft, and maybe that’s why we lost.”
~ Steve Jobs

During his first tenure at Apple, he insisted on control over the complete solution – elegantly weaving hardware and software together seamlessly. This made Apple products the preferred choice for loyal fans, but ignored the platform war that Bill Gates commanded from his perch at Microsoft. Microsoft presented a different model, stamping out a common operating system for the IBM Personal Computer and peer products from Dell, Hewlett-Packard and dozens of others. Separating hardware from software fostered a hugely competitive environment, driving down hardware costs and proliferating the development of a vast ecosystem of MS-DOS and then Windows applications.

Apple found itself a small, expensive specialty item in the very field they created, ultimately sidelined from the exploding business market, which preferred low-cost in high volumes. Google’s Android threatens Apple’s iPlatform now on the same strategy. Only the open arms of the iTunes app store slows Apple from being marginalized again. Like Edison over Tesla, VHS over Betamax, and eventually ¥ over $, battles are won not by the better product, but by the more prolific platform. 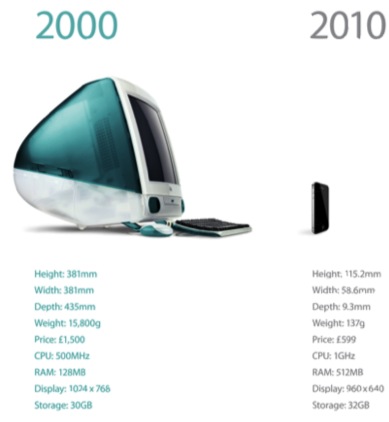 Your cellphone has more computing power than the entire 1969 NASA program that put two men on the moon. Excluding all the slide rulers.

Moore’s Law anticipates the geometric growth of computer processing power; this illustrates the relentless commercial progress of all successful platforms in free markets. We all benefit from the evolving speed, power and compression of the technologies we rely on every day. From lightbulbs to cellphones, fuel efficiency to pollution reduction — in a competitive field, you’re either moving or dying. GE’s legendary CEO Jack Welch described it by this formula — “If the rate of change on the outside exceeds the rate of change on the inside, the end is near.”

Intel famously branded their processor platform by labeling personal computers with “Intel Inside”. 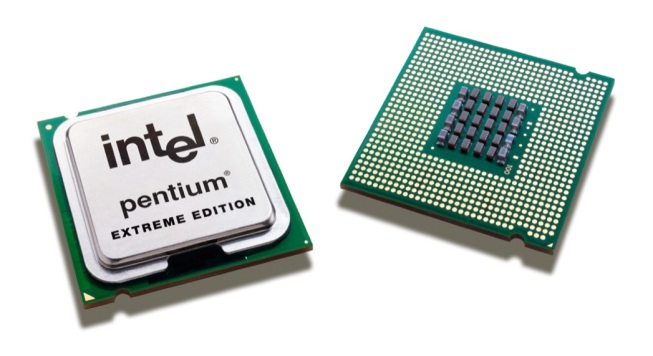 Intel may regret  putting themselves, ironically, in a box. Their subsequent Sponsors of Tomorrow campaign showcases the rock-star engineers behind their patent engine, which includes USBs and other essential elements of computing and data transfer.

Thanks to this first and arguably best “ingredient branding” campaign, consumers learned to appreciate that the chip provides the engine of the personal computer, and Intel flew the brand standard under Windows.

Like power grids and gene sequencing, platforms can give the invisible ingredients little-seen by their users. That makes them no less powerful, and can offer benefits to cut competitive threat.

Software represents one of the most prolific venues for platforms, because they avert the traditional barriers and costs of the industrial age.

That cuts both ways, since it also lowers the walls for encroachers, and demands that winners endure an endless marathon of constant reinvention, upgrades and version releases. Consider the path to momentary dominance for three waves of electronic spreadsheets. 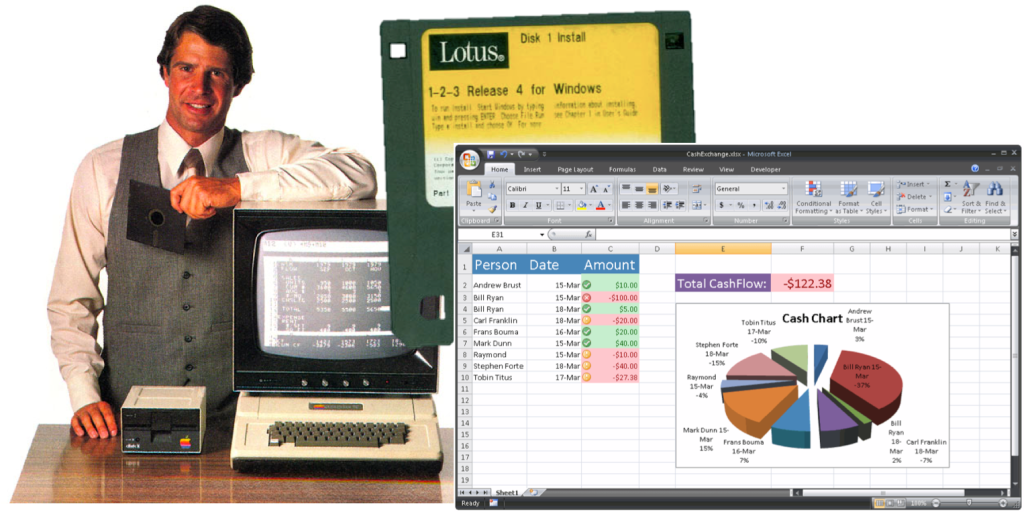 Even as their disks grew less floppy, from VisiCalc to Lotus 1-2-3 to Excel, each wave of innovation rode in on a new platform.

The first “killer app” arrived in 1979 with VisiCalc. The original electronic spreadsheet drove floppily to glory on the Apple II.

Lotus 1-2-3 took the crown in 1983 as the defacto standard with the arrival of the IBM PC. Microsoft’s Excel only usurped dominance in the mid-1990s, plunging in through the Windows platform. Despite the importance Lotus played in promoting Gates’ aspiration to put a desktop on every, well, desk top, Microsoft was able to replace its dominance by presenting Excel as an integral component of the Office platform. (And yes, platforms can ride platforms, like steam engines ride rails.) Google changed the game, as its transformative business model must, with cloud-based spreadsheets through the Google App platform. Not only free, Google Spreadsheet enables live multiuser collaboration. Microsoft’s begrudging move to the cloud with Office 360 may prove too late to save Excel.

From Sumeria’s cuneiform writing system to Gutenberg’s printing press, from the Transatlantic telegraph cable to the World Wide Web, and from the Traveler’s Check to Bitcoin, the most transformative platforms serve as networks — a conduit for countless other innovations connecting vast audiences. 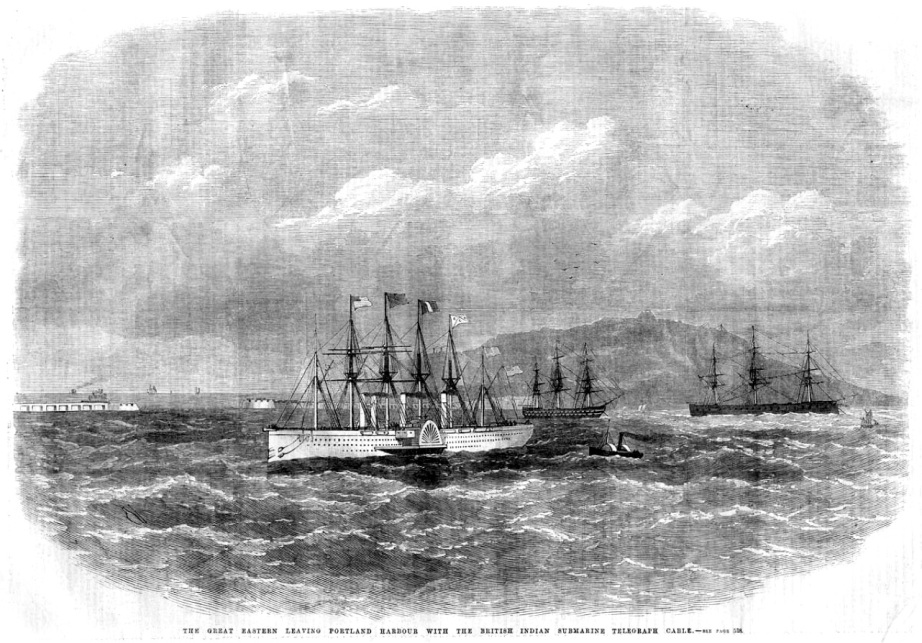 In summary, platforms hold the promise of outsized rewards for daring innovators.

Platforms cut costs, streamline growth, integrate far-flung participants, fend off challengers, and connect larger audiences across much broader horizons than any single innovation could hope to do.

So how do you build a platform innovation?

Maybe you’re intrigued enough to consider taking a plunge, then? Great. See the first of eight lessons from iconic platform designers, in my next post.