This is a story about navigating dangerous waters. Survivors test the waters first.

Before it passes from memory completely, let’s explore an ocean from an earlier millennium – the late 20th century. As in prehistory, leviathan predators stalked these depths. In the tumultuous market of booksellers, these were the minnows…

In 2005, Renée Mauborgne and W. Chan Kim, professors at France’s INSEAD business school, published Blue Ocean Strategy. They urged us to “test the waters” of our markets. Beware the blood-churned red ocean, where too many predators lurk in the shallows, competing in a violent frenzy where only the strongest survive.

Seek the calm blue ocean. Find your niche in the open depths of a pacific ecosystem. As their subtitle advises, these are the seas where you can “create uncontested market space and make the competition irrelevant“. 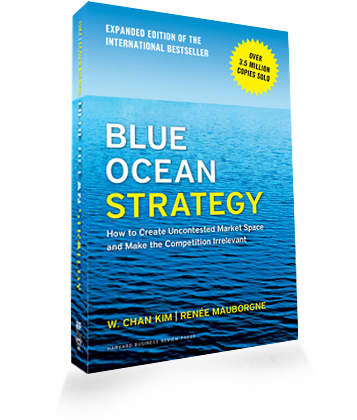 Their remarkably successful metaphor has made Blue Ocean Strategy a standard business school text and brought fame to the authors. Arguably, their earlier article, a predecessor to this book, offered a more broadly useful framework, if only because of its simplicity.

According to the nine types of strategy framed in my prior post, Blue Ocean primarily addresses the top left, Competitive Strategy. It offers a valuable addition to the arsenal of tools published by Harvard’s Michael Porter 20 years earlier. But it only covers a small corner of the matrix – the “overserved” market at the organization level. 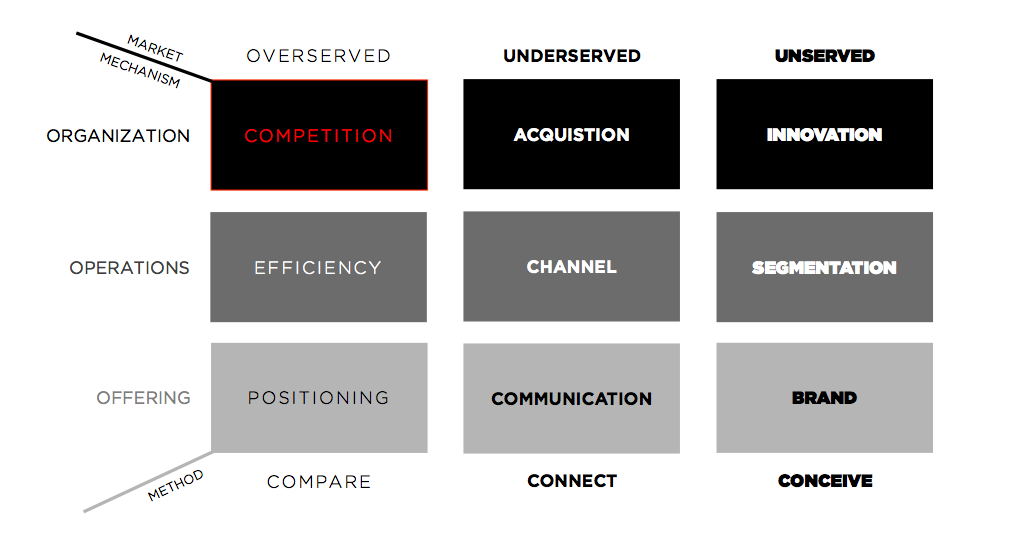 Competitive Strategy – though pivotal – represents only one of nine to investigate.

Scanning across the top row, how will you assess and address all three market conditions? At any given moment, you find yourself in markets that range from overserved “red oceans” to underserved blue oceans. And ever so occasionally, when demand goes unmet (and usually undiscovered or abandoned), you uncover an unserved oasis of opportunity, yearning for innovation.

Each market condition serves demand differently. As the red arrows indicate, you face questions of method and timing. Will you build, buy or ally with others? Will you compete now, or invest today to reap tomorrow?

Tier 1 Organization strategies navigate your place in today’s market and choices to win against competitors, with partners, or with new solutions.

Years before they plumbed oceans, Mauborgne and Kim designed a simple tool that helps us to explore the breadth of strategy options.

A millennium ago, our intrepid professors cracked open the door to “market spaces“. Their grandly labeled “strategy canvas” compares market positions, informing all three market conditions and strategy options; go head-to-head with today’s competition, merge with or acquire additional capabilities in some form of partnership, or innovate a new position entirely. 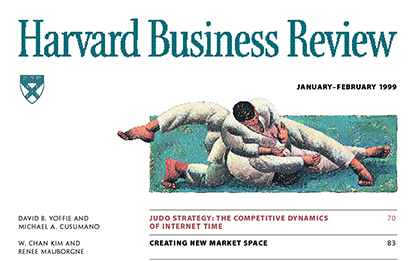 In 1999, beating the internet apparently just required a bit of judo.

An example illustrates how you can reset your organization strategy to address any of the three market conditions across our matrix.

Turn back the page

Let’s return to that simpler time. Back when music was sold in plastic circles; words came  printed on paper rectangles, bound with string and gut and glue. To discover new titles you laced up your “browsers” – strolling the well-lit aisles of your favorite book store.

Even then bloody battles raged for survival.

Starting in the 1970s, new entrants challenged an ancient market model. By 1999, Borders Books battled Barnes & Noble for supremacy circling each other like the last surviving tiger sharks. Local book stores scrambled to survive in nooks and crannies of the market. Many closed up shop, sardines thrashed to chum. The coming digital tsunami barely registered as the century approached to its analog conclusion.

Remarkably Amazon didn’t even register as a competitor in 1999, even though Barnes & Noble had sued Amazon two years earlier for their claim to be “the world’s largest bookstore”. They countered that “Amazon isn’t a bookstore at all. It’s a book broker.” So there. Nyah.

Where mall stores previously set themselves apart from independents, the megastores doubled down and pushed their position even farther apart. If you’ve ever suffered the misfortune of trying to compete with a better offer at a better price,  you know your options are limited. Only niche specialty stores could survive, by exploiting their singular focus, deep knowledge and curated community of bespoke author events. That’s a good model, but only works in dense markets with sufficient population to justify specialty stores.

Currents shift. As the 21st century unfolded, Amazon went on to redefine consumer expectations and experience, defying hundreds of years of buying behaviors. The explosive growth of the internet economy transcended all borders. Which ironically closed Borders.

Barnes & Noble, despite their early efforts to disparage Amazon, still clings to life. What began as a simple bookshop in Cooper Union at the end of the US Civil War had grown to threaten that very model. To survive at scale, stores were closed, space was reconfigured, Starbucks took up residence, and the bookstore adopted many of the coffee shop’s methods to make space for bricks among Amazon’s clicks.

Although still under threat, Barnes & Noble diversified into a publisher, a café, and a tech company and digital enterprise in its own right. Their Nook first arrived in 2009 in partnership with Microsoft, and now Samsung. The Nook may not survive its nook, but B&N’s online business now accounts for an increasing percentage of revenues and margins. 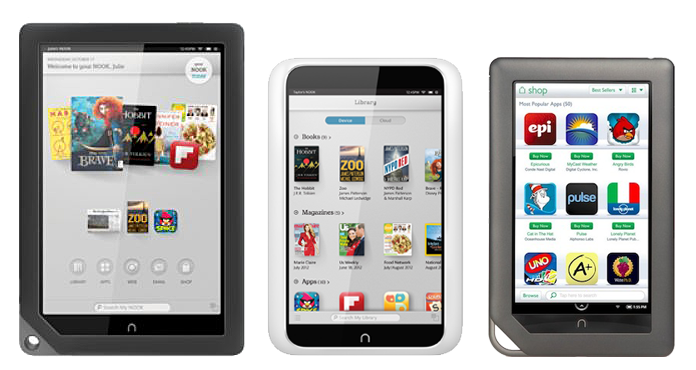 And the markets continue to shift. In the latest ironic twist, Amazon opened its first physical bookstore in Seattle.

Our story does offer a happy ending. Despite all the churn, specialized local book purveyors shoulder on. Among my own favorites, the Mysterious Bookshop in Tribeca specializes in a single genre, hosting marvelous author readings and special events. I hope your neighborhood offers similar pleasures. 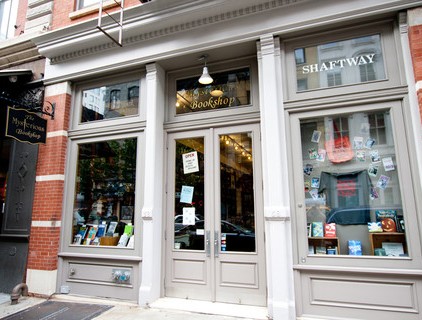 My next post explores a similar battle for happy coexistence in a different form of entertainment – the live theater. Until then.

News As It Comes

writes one short story every week