How did the iPod show up late and still become the life of the party?

In my prior post I described a balanced approach to optimize growth and mitigate risk. To understand Apple’s innovation strategy, you can translate three elements of the Diamond into an 8-step process. 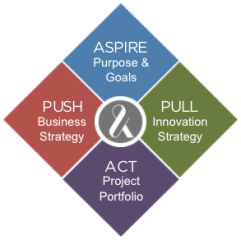 Quick review – the purpose and goals you aspire to achieve at top translate to your business and innovation strategies, glued together by the ampersand and converted to projects. Some will push today’s agenda forward. Others will explore tomorrow’s agenda and pull the business to your vision for the future.

Explore the top right – how Apple would set aspirations, aligned their business, and designed for a more personal musical future with innovation strategy. These three elements map out a simple process.

Leaders drive growth or find the door. Ensure your senior executives and sponsors understand what they’re asking for. Diagnose the market and your position in it. Give them the lay of the land to help them declare their intentions for growth. Some will shy away from risk by limiting their ambition. Others will shoot for the moon without understanding the risk they need to accept to win that reward. Hold them accountable to clarify their aspirations with steps 1-3.

Next you align the organization around important opportunity areas (4-6). Integrate short and longer-term action plans and investments. Design or refine internal processes and org structure to free your people to act. Too often inspired, ambitious teams are ill-equipped, under-staffed, or simply unsupported by leaders who don’t appreciate that they must lead innovation differently from driving business-as-usual.

Translate your ambitions into an innovation strategy. Investigate, frame and prioritize the most promising areas to explore. Map out your plan to pull the business to the future in steps 7-8.

Keep in mind that the more conventional (and equally vital) business strategy will be pushing forward. Map the two strategies into a single path. You will need some different tools to frame the future and project possibility against probability.

Put the world in your pocket

To make sense of this framework consider a familiar example. You probably carry it in your pocket.

Remember how the world of personal music used to work? When you take the time to reflect on the changes, you’ll be astounded by how vastly our expectations of the industry shifted.

In the waning years of the 20th century, the Sony Walkman defined music-on-the-go. The world celebrated Sony as the leading consumer electronics innovator of the era – great design for new experiences.

Sony made music move. Analog scratches on your mixtape provided your road trip’s sound track. Or maybe your CD player jostled clumsily at your hip like a miniature Close-N-Play. 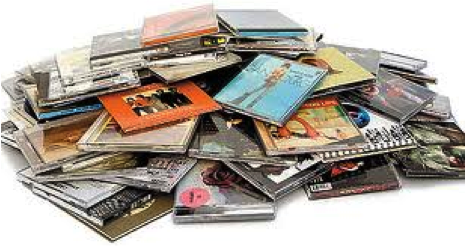 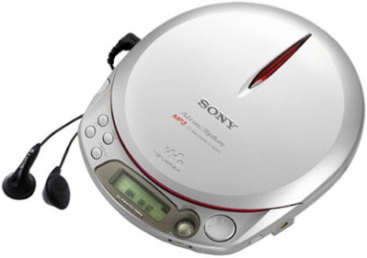 Record companies jealously guarded their closed cartel – controlling distribution, insisting that to own your favorite song you had to buy an entire album.

Meanwhile, the looming transition to digital music rode the first wave of explosive growth of the World Wide Web.

Before long Napster and other clever file-sharing services crept into a gray market of pirated music. Innocent mixtape party people woke up to discover their actions criminalized.

In predictable response to their eroding control, record companies fumed. They unleashed their lawyers to prosecute their customers, and force site shutdowns.

The original iPod, announced by Steve Jobs on October 23, 2001, was far from the first to market, or second. Or third. The iPod showed up late, the 6th major mp3 player, preceded by the Rio and the Nomad, and belatedly followed by the doomed Microsoft Zune. Samsung’s Uproar – the first mobile phone with a built-in MP3 player, was launched in Korea a full two years before the iPod.

Yet the iPod – now multiple product generations later and morphed from standalone to smartphone – reigned supreme.

Was this inevitable? Not at all. Why did the iPod win the market and go on to redefine industry after industry? Speculators cite everything from Steve Jobs’ force of will to the simple elegance of the iPod interface, the larger screen, or Apple’s demanding control and integration of hard and software.

Valid arguments all. But even in combination, they could not have precipitated such a standout success.

The answer? The innovation was not the iPod. It was not the device. The breakthrough was born of a new vision for the immersive experience of personal music. The real innovation was the iPlatform and the ambition to pursue it against entrenched interests.

As charted in the 8-steps, the innovation strategy for the iPlatform began with a clear recognition of the changes underway in the world. They watched digital technologies evolving to threaten the accepted limits of the music industry. To Steve Jobs’ credit, and our benefit, he refused to accept those limits as immutable. His bold ambition fuels our next two steps.

State your intentions. Where others bellow, Apple whispers. A trusted inner circle huddled around this vision, on a need-to-know basis. The CIA would envy their nondisclosure provisions. Even under cover, bold declarations remain central to Apple’s primary business efforts. 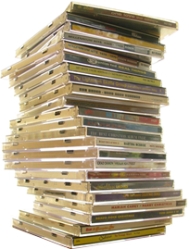 Many of my clients and students are surprised to discover that the iPod represented the second stage of Apple’s music innovation strategy.

To put 1,000 songs in your pocket, Apple first tackled the barrier that competitors skipped. Design a way for consumers to access all the music they already owned. Compress piles of worn discs and tapes and vinyl into a single pack of cards. 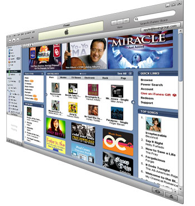 The iTunes “digital jukebox software” was launched in January 2001, fully eight months before the first iPod. iTunes represented the first wave in a Trojan Horse strategy. For the first time, music-lovers could build a digital catalog of the music they already owned. This wed them to Apple’s staged vision for the future.

The software platform morphed to the iTunes store, complete with the earthquake innovation – buying one song at a time. Apple breached the record company cartel. One by one, the walls tumbled. iTunes spread from music to video, and came full circle music streaming, the next generation as a subscription model.

Folklore contrasts this tidal wave with the stunted vision Bill Gates revealed when, as CEO of Microsoft, he first encountered Apple’s new iPod. After turning it carefully, prying at the seams, toggling the touch dial, he dismissively dropped it with a satisfying clunk on his desk, sniffing “aww, it’s just a hard drive.”

As in the noble work of the Gates Foundation, Bill Gates was technically right. But in this case he was also blindingly wrong. Lesser competitors than Microsoft have made the mistake of underestimating Apple’s ambition (though few have made it such a habit). The Apple Watch and the iPad Pro are only the latest in a long line of initial product launches to win skepticism or outright reproach.

In the case of the iPlatform, the aspiration started by looking outside. The whole world recognized that the shift from analog to digital music was inevitable and that the potential for industry disruption had arrived. Jobs declared the intention to create a truly personal music experience – including ease, breadth and access. That translates into an ambition for innovation – made visceral by casting it in the voice of the customer:

“Put my entire music collection in my pocket. Make it available on demand – whenever and wherever I want it. Make it simple, intuitive, elegant and reliable.” In other words, play to Apple’s core strength – design for end users. Simplify complexity. Weave the morass of technical chaos into an easy, welcoming package. 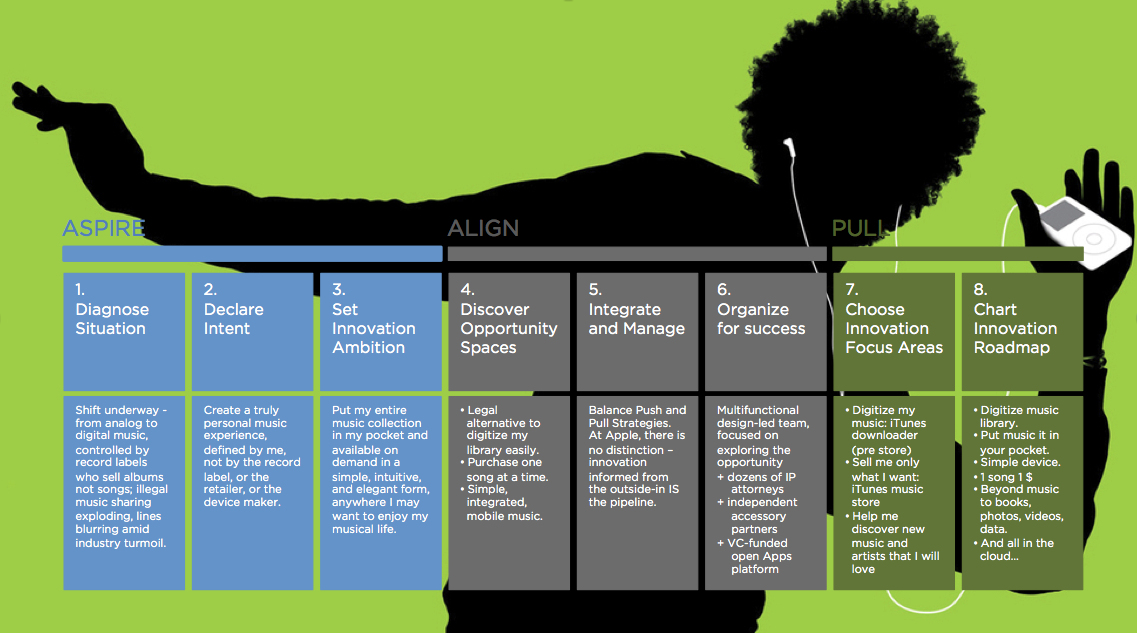 Review Align steps 4-6. Apple mobilized a battalion of underfed lawyers to crack the record companies. Mission – get one company to sell one song. Apple blew open the market for outside partners to extend the platform (and begrudgingly approved the most profitable piece of the puzzle, the App Store).

In the Pull steps, they chose their first focus areas and drafted a map of innovations to pursue. Those elements came together in your pocket. Nothing short of brilliant.

From Apples to Oranges

Innovation strategy is not the unique province of Apple, despite what an adoring (but fickle) press might suggest. Market leaders show the way, including prominent long-term players like General Electric and Procter & Gamble, and relative upstarts from Amazon to Zara. Even Microsoft took a good run back into the game.

GE’s Jeff Immelt declared a shift from Jack Welch’s celebrated legacy of disciplined functions. He painted a new picture, cross-functional teams of disciplined innovators. IBM pivoted from hardware to services, and again reorganized to blend people and technologies around creating a smarter planet.

Make your own luck

Thomas Edison wasn’t kidding when he described the process as 1% inspiration and 99% perspiration. Once you set your strategy, innovation is less about creativity than it is about perseverance. So kick aside the bean bag chairs, strap on your apron and and roll up your sleeves.

Get comfortable with this 8-step construct, and you’ll be able to reverse-engineer innovation strategies.

Try this. Identify an innovation you admire, from Post-Its to pace makers. Deconstruct how it might have played out using these 8 steps. Hypotheses will do. If you could actually sit in on all of the conversations and studies and working sessions and decisions that must have taken place, you would certainly find gaps that could make it even better. But those strategies still succeeded to get those breakthroughs into your lives.

Innovation strategies don’t need to be perfect. In fact there is no such thing as “right”. Just get it right enough to take action, and learn along the way.

Put your aspirations into action

Your innovation strategy should complement your business strategy. They plot a path to fulfill your declared aspirations. But plans blow nothing but hot air until you turn them into actions. Build your portfolio of priority projects. Define, discover and design solutions. They may be new to your company, and maybe even new to the world.

Decode these methods in upcoming posts to make them your own. Until then.